by David Nartey
in News
A A
0

The Ghana Union of Traders Association (GUTA), is asking the government to initiate stringent measures to stabilise the cedi.

According to GUTA, the constant depreciation of the cedi to the dollar is gravely impacting business activities, contributing to the current economic hardships.

In an interview with Citi News, the Vice President of GUTA, Clement Boateng, outlined some measures to be considered by the government in addressing the problem.

“Everything that we do is benchmarked on the dollar and we think the government must do something about the situation. If we talk about the telcos, the oil and extractive sectors, at the end of the year, they are repatriating their profits back, and you can see the chunk of monies they take from here so the government must look at its investment laws,” he said.

The Ghana cedi has recently been under serious stress depreciating against major trading currencies including the US dollar.

Between January and March 2022, the currency has lost more than 14% of its value, a very significant drop compared to previous changes.

The development is leading to rising cost of products in the country including cement and fuel.

The government is yet to make any direct pronouncement on what actions it is taking to tackle the problem, although various stakeholders have been making some suggestions.

The Association of Ghana Industries President, Dr. Humphrey Ayim-Darke, believes moves to reduce the import of finished goods will be in the best interest of the cedi, which continues to fall to the dollar.

He blamed traders importing finished goods for contributing to the struggles of the cedi. 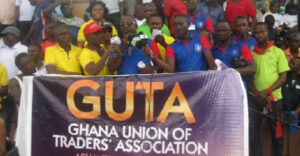 Family heads to court over death of relative in police custody

Nigerian sentenced for posing as Ghanaian to acquire Ghana Card

Family heads to court over death of relative in police custody

List of individuals who donated to honest Taxi Driver who returned GH¢8,400 he found in his taxi to the owner

Nigerian sentenced for posing as Ghanaian to acquire Ghana Card

Shatta Wale, Medikal cleared by court to travel outside Ghana during Christmas